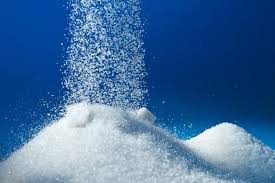 The reason that this eating plan resonated so loudly with me is because I completely got the nature of addiction that the realmealrevolution.com website talks about. When I ate too much I was never satisfied. I always wanted more and I never felt full. I could eat a packet of biscuits and still feel as if there was a hole in my belly. I could have a 200gm bag of crisps and it felt like a drop in the ocean of my hunger. So I was interested to see if I could actually go cold turkey and just like that give up sugar overnight.

That is a lot harder than you think. Not because I craved sugar but because it is in everything – and I mean everything – from bread, to pasta sauces, to crisps, to tomato ketchup to breakfast cereals. There is so much of that glorious white powder hidden in all our food that to get rid of it takes a mammoth effort. Have a look at a few labels – frightening! 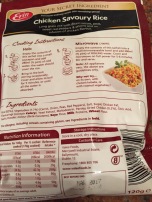 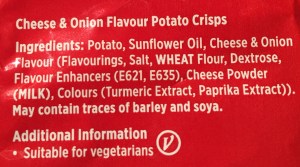 In fact there is – sugar hides under many names – and dextrose is just one. A few others are sucrose, maltodextrin, lactose, corn syrup, barley malt, mannitol, to name just a few. My suggestion? For the first week or two avoid processed foods altogether.

By eating only non processed food I managed to cut it out and have been sugar free now for 50 days. That is not to say that I have had no sugar. I have had no hidden sugar – and very little natural sugar to boot. I have had berries and the occasional glass – okay or two or three – of red wine but that is it. No cravings. I had a slight headache on and off for three days at the start but none since. If you feel the urge hit you take something salty – and you do need your Himalayan salt – it has over 80 minerals and so many health benefits you’d need to google it yourself if you don’t believe me. It is salt in its purest form – see – no processed salt here!

Anyway – back to the sugar business.

For our visitors I thought I’d better make some dessert however – in my pre-banting life I was a very good baker – I am known for it – so I had to provide dessert. I came up with this little number. It is gorgeous. It has replaced my berry crumble – I think it’s even nicer than crumble – and is remarkably simple to make.

A selection of nuts – pecan, walnut, hazelnut, and almond flakes

Some grated nutmeg or cinnamon to taste

Dehydrated raspberries if you can get them – mine come from Trader Joe’s in America thanks to a kind sister! You can get them in Sainsburys though in the North or get them shipped from Amazon.co.uk. They are not an essential ingredient however so don’t stress!

Cook the berries until they have simmered for five minutes then take them off the heat.Allow them to cool – or serve hot whichever you prefer.

Put a small amount into a glass – about three or four dessert spoons only – leave the juice out – I just used a slotted spoon to lift them.

Bash your chosen nuts in a pestle and mortar if you’re fancy – if not – use either a food processor or put them in a bag and hit them with a rolling pin! I added some grated nutmeg but it’s not essential. Then pour some of the mix over the berries.

Top with whipped cream, some dessicated coconut, flaked almonds and dried raspberries if you have them.

I sometimes grate a little 85% dark chocolate over the whole thing as well – but I’m not bothered. 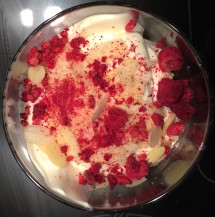 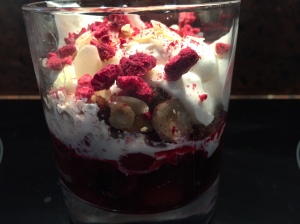 If you are feeling really decadent you could whip the cream with some mascarpone cheese and make it almost like a deconstructed cheesecake. You have to try it to believe it. This dessert is right at home beside apple tart, cheesecake or any other rich and creamy dessert – but it won’t feed your sugar habit and you can have this knowing that it won’t make you lose control. At a family gathering recently it was dessert of choice for several of the party – and they were none the wiser that it was a banting safe option.

Next time I’ll suggest a few easy lunches on the go – and show you how this food plan can be adapted for the skinnies in your house too – it’s not just a weight loss plan remember!