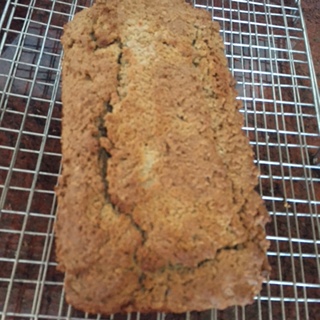 I’m posting quickly tonight because I finally did something I had planned for so long – and I eventually got around to it today. I wanted to share the results with you.

It’s hard when you get off the Banting treadmill to get back on – harder for some than for others. Paddy has fallen off slightly but the difficulty is that because he’s a man it hasn’t caused him a lot of weight gain. However with confirmation season approaching he has decided to join me fully again. He never ate as much fat as I did and I think that makes it much harder to bant – if you don’t eat fat you don’t feel full and so you eat more – but of the wrong stuff – and it becomes a vicious cycle. I wanted to make him some bread to show him that we can have a normal lifestyle while still staying true to the banting way. Truth to tell I also found a kilo of sunflower seeds I had bought in the first flush of banting which need to be used up and I figured this is a way to do just that!

I apologise in advance – I didn’t measure anything and just threw stuff in as I thought of it – so it might not have worked at all – it did – and beautifully too – this bread is nutty, full of flavour and almost sweet! Here is an approximation of what I did. I will measure the next time and update when I do. I should also have cooked it for a few minutes more – it is slightly wet inside – but we like our breads underdone at the best of times so it worked for us. I had a slice this evening with butter – it was gorgeous and I can only imagine how wonderful it will taste with salmon paté or just plain old smoked salmon on top! It tastes eerily like my mother’s brown bread from long ago – and looks like it too.

I started by blitzing the sunflower seeds to a pulp in the food processor. Then I added all the rest of the ingredients on top and blitzed again until I had a mixture that looked like a thick bread mix. I really did this by trial and error – I have no scientific knowledge of the whys behind using bread soda or baking powder but it seemed like a good idea at the time!

When the mix was ready I spooned it into the usual 2lb loaf tin and put it in the oven for 20 minutes at 180 degrees fan. Because there was no butter in it I put a few pats on top – I might add it in the next time to help to make a lighter consistency although it wasn’t too dense at tall really.  Then we turned the oven down and cooked it for a further 30 minutes at 150 degrees. It could have done with maybe ten more minutes but I took it out anyway.

It turned out easily from the tin – I do line my tins with the parchment inserts mind – and I left it to cool. There was a little fall off on the side – and I was afraid it was going to be crumbly and binnable – but no – I cut a slice and Paddy was impressed – it tastes great! The top of it looks green  when you slice into it – don’t be put off – it’s made predominantly of sunflower seeds which go green when baked!

I am going to cut this up tomorrow and freeze it – it will be lovely toasted I think with butter – or under the grill with cheddar on top! Another successful banting bake, and a wholly made up recipe of my own – now I just have to try to replicate it….. hmm…

Talk to you soon 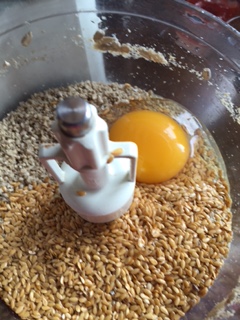 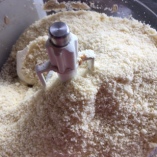 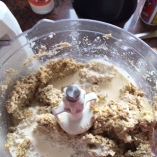 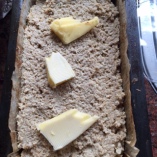 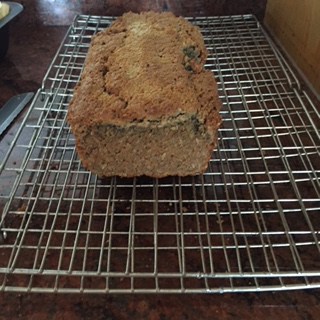 We ate the bread today and as we cut further into it it looked greener – it tastes divine but some of you might think there is something wrong with the green colour! There’s not – but I’ll make it next time with a bit less sunflower seed and a bit more almond flour maybe…. then it won’t taste as great though.