Hi everyone. Apologies that it’s been 11 days since my last post. Life moves quickly on and people think I’ve given up on the banting – a favourite past-time has been to try things for a while and then give up. Not this one! My mother tentatively suggested that when the weight is not moving in a downward trajectory to stick with it. That has been the case for the last three weeks – until yesterday. I broke the two stone barrier and then had another pound off this morning – such a great feeling – I have 29 pounds off and I have brought my BMI down to a 38 – huge for so many of you but such a result for me. My husband went to the doctor and got his blood pressure tablets reduced by more than half. He also got a reading on his cholesterol – 3.6! Even the sceptics are sitting up now and taking note!

The beauty of this plan is I am not on a diet – I am just choosing to eat in a certain way – I can have a glass of wine if I choose, I can have a piece of chocolate if I want, but most of all – for the first time ever I can truly say that I have lost the gaping, yawning hole inside of me that food never filled before. Psychologists tell you that you are emotional eating – I have come to the conclusion that I was addict eating actually – because life has not suddenly become utopian – the same rows and the same struggles happen every day – but I don’t have the same yearning gnawing at me to feed the beast – the sugar addict!

Two updates on the previous post – that Thai curry sauce is available from Dunnes Stores – and at a cookery demonstration the other night I learned that if your coconut milk separates then add a little chilled butter and it will bring it back together!

Okay – today’s recipe comes from a site called Iquitsugar.com  – there are so many sites out there that have all sorts of recipes for you to try out. I’m going to my parents’ in – oops ten minutes so I made this cake as an alternative to Mammy’s tart! Let’s see how it tastes – I’ll let you know tomorrow.

Mix all the dry ingredients together in a bowl and put to one side.

Throw all the wet ingredients into a bowl together – except for the egg whites – they need to be whisked to a stiff peak separately.

Then add the dry to the wet – I did it the other way around – will try the correct way the next time!

When all is mixed well fold in the egg whites and place all in a cake tin – mine was a ten inch – Id say an eight inch would be better but I didn’t have one here so I made do. 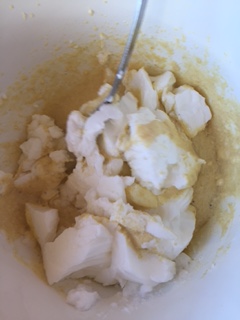 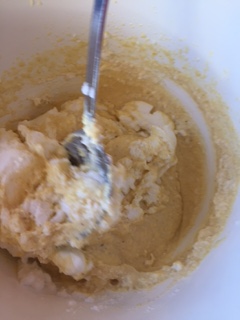 Cook this for about 25 minutes.

It came out flattish but smelling great – I’d suggest leaving in the tin as it’s very delicate – mine cracked slightly after moving it – not to worry – there’s a lovely sauce to go over it!

Heat the coconut cream in a pan and add the lemon juice and xylitol.

Pour over the cake and serve. I have no photo yet as I will do that at home in Newbridge!

I’ll post how it was received tomorrow – along with my husband’s meat soup recipe – he swears by it for filling him and helping the pounds to move!

Keep that sugar at bay!